What happens in a lesson? 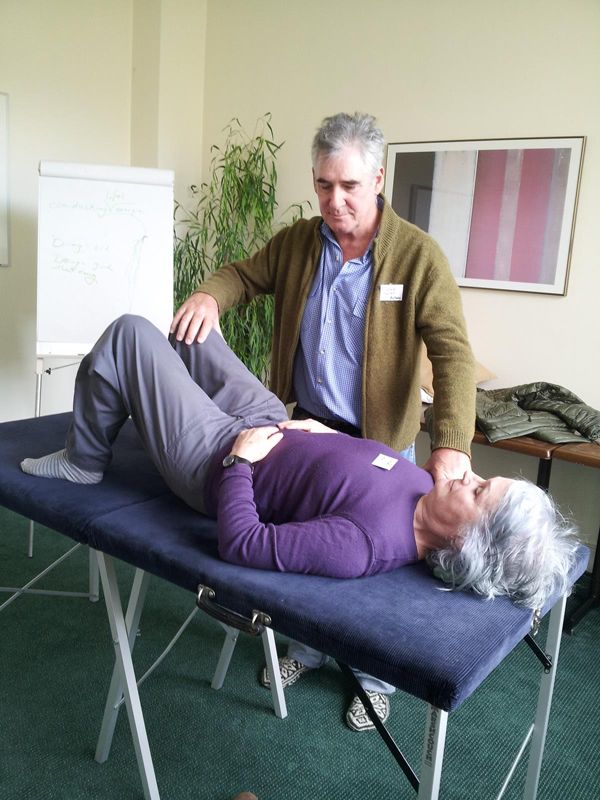 Lessons are individual, pleasant and painless, lasting about 40 minutes. Part of this time the pupil is standing, part of the time sitting, and part spent on a padded table with knees up. Leggings or trousers of some kind are useful.

The lesson is taught with the teacher’s hands guiding the pupil’s body away from postures of poor balance and coordination, as much as the teacher guides the pupil’s thinking into a constructive consideration of the self. There is no manipulation in the sense that a Chiropractor or Osteopath might manipulate, no clicking, twisting or prodding. There is no white light drawn from the Cosmos, no mantras to learn, in fact, nothing to believe at all.  The pupil gets a new experience of balance and coordination and then evaluates it- it’s that simple. Pupils are welcome to bring their partner or child to observe or share the lesson.

In a perfect world, the first lessons are taken close together, two or three each week for a month, but I have no problem taking people weekly, if that’s what their circumstance warrants.

For more idea of what happens in a lesson, there are lots of examples in You Tube.

The reason that first lessons often yield miraculous results is because the new student does not bring to that first lesson any expectations of results or feelings of change associated with their own habitual co ordinations. They literally don’t know what to do, and therefore do nothing, which from an Alexander teacher’s point of view is perfect. They don’t know what to feel for, so they don’t try to get a particular feeling – they don’t contract, the spine extends, the thoracic cavity opens, they come up like Lazarus and walk out with their feet not touching the floor, much as I did after my third lesson. 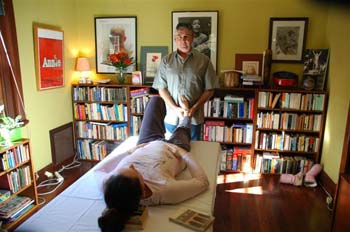 Strange things can happen for a new pupil. The first lesson in particular can be a great surprise. It is in the first lesson that I sometimes get to feel like a healer with mystical powers blessed with the hands of God himself as I transform (apparently) some poor stooped, twisted lawyer into the form of a Greek God, upright, broad, balanced and smiling. I should point out that sometimes in the first lesson very little happens. A new pupil may feel a little calmer, or taller, or bent one way or another, or be completely mystified.

This, of course, would be the perfect moment to whip out the diary and book them in three lessons a week for the next month. I don’t do this.

Instead I say “Why don’t you go away and get a book on the Technique or look up some websites like www.alexandertechnique.org.au or www.stat.org.uk (if they haven’t already), find out what it is you’re coming for and give me a call in a few days – and they usually do.

They’ve had an experience of subtle and profound change inside themselves. It feels much more comfortable than what they’re used to. It’s also just the beginning. I know, I can help them to improve their lot, but this honeymoon, this new relationship with themselves, will only last as long as honeymoons do.

Pretty soon this new relationship with themselves is going to require a little work, a little thought. Not effort, I would hasten to add, but thought, consideration, evaluation and mental application.

Within five or six lessons, especially if they can come three times a week, they will begin to experience new surprises…

Within five or six lessons, especially if they can come three times a week, they will begin to experience new surprises, some pleasant, some not so pleasant. It is quite likely that after six lessons, taken reasonably close together, a new pupil will experience happy relief from some of their nagging pains. They often report great relief from what has been chronic pain in their necks or lower backs. However, no sooner has one pain abated than another may quickly arise. It is very common for new students, especially if they are being assiduous with their homework (the lying down procedure) to report the appearance of a dull ache in the long muscles of the back between the scapula and the sacrum. This, I explain, is those hitherto overly contracted muscles expanding and engaging in the work of supporting the head. Prior to these muscles taking up their load they (the pupils) have been compensating by stiffening through the neck, shoulders and chest. As the long back muscles begin to play their part in the postural process, the chest, shoulders and arms will soften.

If the new pupil is keen, happy to take regular lessons and apply themselves to their homework, other happy surprises in self-discovery as well as curious new aches and pains may follow. A pupil may feel very light after a lesson and have an unusual sense of knowing where their knees are and how they work. Sporadic pain may appear between the scapulae across the back as these bones begin to widen and the associated muscle fascia releases and extends.  Other muscle groups subordinate to the coordination of the head and spine may also make themselves felt, including the legs, the calves and arches of the feet, and the upper arms and forearms.

A pupil who applies themselves with dedication and intelligence may eventually experience stabbing pains in the ribs as the intercostal muscles expand and allow the ribs themselves to widen apart from each other. These are quite literally growing pains, such as we experience in adolescence.

I don’t suppose this sounds like an awful lot of fun but oddly enough these symptoms, if understood in the context of dynamic change and growth, can be part of an extraordinary exhilaration in physical, mental and emotional development.

The first few lessons may also uncover a Pandora’s Box of physical and emotional history. Undoing of muscular tension may correspond with an emotional release. Occasionally a new pupil will start crying in the middle of a lesson. Provided they are not in pain I do not ask them what the matter is. If I did ask, they would probably reply “I just feel sad”. I had events like this myself as my own back and shoulders got moving again- it passes.

A pupil may experience the onset of pain from some forgotten injury, or symptoms of a childhood illness, such symptoms having been masked by a cloak or armour of muscular contraction until that release facilitated by the first few Alexander lessons.

The human body can be a very strange place to find oneself.

I can happily say that many people have very little trouble. They come, they grow taller, and their faces get softer and happier week by week. Friends and relatives who see them only occasionally ask them if they’ve got taller, or have they had a haircut, because they look different. Without wishing to sound like a snake-oil salesman, people often look younger!

Book a Lesson with Glenn