Who was FM Alexander?

Frederick Matthias Alexander was an actor and teacher of elocution who had developed by 1904 (when he left Australia for England), what he believed was a new breathing technique for actors and public speakers. He called it then, in his pamphlets and newspaper advertisements, “Full Body Breathing”.

What prompted him to leave Australia and find a wider audience in London, particularly in Harley Street (at the time home to the Western world’s leading medical specialists) was the encouragement of a Sydney doctor, Stewart McKay, a specialist in respiratory rehabilitation.

Around the world at the turn of the 20th century there was an epidemic of tuberculosis (adhesions in the lungs) and standard treatment was “the Rest Cure”. McKay heard of Alexander’s success with (amongst his pupils) asthmatics and began sending him patients who were not responding to conventional therapy.

McKay, well published and with an international reputation, believed Alexander was performing the most sophisticated rehabilitation for respiratory ailments available at that time.

Alexander had begun teaching Full Body Breathing in Melbourne in 1899, and moved to Sydney in 1901. He was primarily (then) a teacher of elocution – the ability to stand up, speak out and be heard. His clients (remember this was well before the advent of microphones and public address systems) were politicians, (you couldn’t hold public office unless you could be heard), clergymen, actors, singers and hobbyists.

His pupils reported to him the same changes in their bodies that Alexander had noticed in himself in the process of developing his breathing technique, i.e. an increase in stature, improvement in circulation of the blood, abatement of headaches, improved digestion, better sleeping and a generally improved feeling of well being.

When Alexander had proved his work successful with McKay’s patients, he left Australia with letters of introduction to certain Harley Street specialists and never came back. 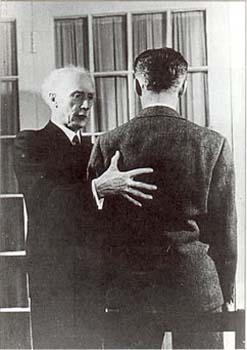 Where did he come from?

He was born in 1869 in Wynyard, North West Tasmania. His Mother was a midwife; his Father was an excellent farrier – so good, he’d been taken across to Melbourne several times to shoe particular horses for the Melbourne Cup – a fabulously rich horse race even then. Alexander Senior had a technique for shoeing horses in such a way as to effectively correct their gait.

Alexander, although a sickly child and temperamental, developed a great love of Shakespeare and was encouraged in this by his school master at Wynyard.

He was a self motivated teenager, and by the age of 17 had secured not only a position as secretary to the manager at a nearby tin mine (Mount Bishoff), but the agency for an insurance company which allowed him to accumulate an extremely good income for a young man. Within a year he had saved enough to get to Melbourne to undertake training in elocution for the stage, singing and violin. He was engaged in various amateur dramatic clubs and worked at a variety of jobs, some clerical, some more adventurous. For a while he was a professional tea taster. He seemed to fall on his feet with some consistency.

Stage entertainments in the 1890s in Australia, Tasmania and other parts of the world consisted, often as not, of a variety of entertainments in one evening. An elocutionist or reciter might share the stage with a singer and an instrumentalist, each presenting several pieces over the course of the evening.

Alexander in his role as reciter did extremely well from the first, turning professional in his early 20s and touring around the Victorian countryside, Tasmania and across to New Zealand, where in town after town his performance made such an impression on the civic leaders he was consistently asked for lessons in whatever his technique was at the time.

Things began to come unstuck for him around 1893 or 1894. His elocution teaching was fine and consistent but in his evening performances he would frequently send himself hoarse. Neither doctor nor voice teacher could advise him how to solve his problem except with rest, nor was this relief ever more than temporary.

He determined that what he was doing with himself in performance was the root cause of his hoarseness, and (he was a creature of extraordinary focus) embarked on a journey of self observation and experimentation to discover this cause.

His primary experiments, which makes interesting reading, are described in the first chapter of his book The Use of the Self currently published by Orion Publishing Group and widely available. See also the Nobel Prize acceptance speech of Prof. Nicholas Tinbergen, 1974, in which Tinbergen extols the virtues of Alexander’s work and method of scientific discovery.